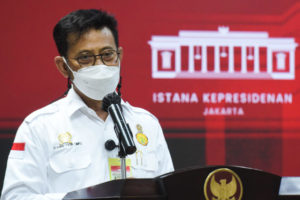 Agricultural sector is one of the sectors that has seen a stable growth amid pandemic, Minister of Agriculture Syahrul Yasin Limpo has said.

“Based on our data, agriculture sector in Quarter I to IV of 2020 continued to improve and remained stable, while in Quarter I and Quarter II of 2021, both data and field condition were all in good control and continued to show improvement,” the Minister said at the press conference on the Announcement of Indonesia’s Economic Growth Quarter II-2021, Thursday (5/8).

In the second quarter of 2021, according to the Minister, agricultural sector grew by 0.38 percent.

This sector also had a significant contribution to the National Gross Domestic Product (GDP) in Quarter II-2021 at 14.27 percent or below that of the manufacturing sector at 19.29 percent.

“Agricultural sector is the leading sector that we can continue to rely on in the future as the backbone for our economy as the growth is quite well maintained,” said Limpo.

Meanwhile, export value in the January-June 2021 was Rp277.95 trillion, growing by 40.29 percent from that in the same period in the previous year.

“This August, we will carry out an Independent Export program at 17 existing gates nationally. Exports from agricultural sector to destination countries are still open,” he said. (RF/UN) (EST/EP)