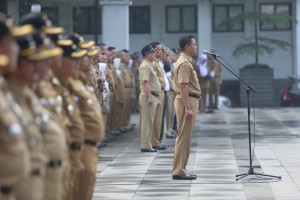 “The warning has been issued by Minister of Home Affairs to the Regional Heads on 1 July 2019 to dishonorably discharge the graft-convicted State Civil Apparatus within 14 days,” Acting Director General of Regional Autonomy of Ministry of Home Affairs Akmal Malik said in Jakarta, Wednesday (3/7).

According to him, of 2,357 state civil apparatus to be discharged, 2,259 of them are working for regional governments. As of the end of June 2019, there were still 275 state civil apparatus in 11 provinces, 80 regencies and 12 cities whose dismissal had not been processed by Personnel Supervisor Officers (PPK).

In accordance with the decision of the Constitutional Court Number 87 / PUU-XVI / 2018 on dishonorable discharge of state civil apparatus, the punishment is applied to those who commit criminal acts related to their position such as corruption, bribery, and others, and their cases have obtained inkracht (a final and binding court ruling) status. (Information Center of Ministry of Home Affairs /ES)