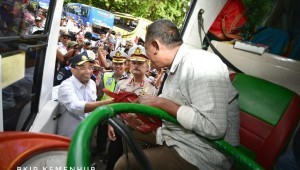 In a bid to prevent bus accidents, Minister of Transportation Budi Karya Sumadi on Thursday (27/12) in Balekambang Tourism Park, Tawangmangu in Central Java province conducted a ramp check on tourism buses to ensure all aspects of safety drive.

We appreciate the effort of Karanganyar Transportation Agency for conducting bus ramp checks to ensure safety of the buses. I hope that during the year-end holiday season, the ramp check and urine tests for the drivers will be carried out intensively. I have also ordered Head of Traffic Coordinator and all Chiefs of Police to conduct massive checks in all places, especially tourist destinations, Budi said.

Furthermore, Budi explained that bus operators that did not pass the ramp check were given various punishments, ranging from warnings to revocation of licenses.

Last year, there were many bus accidents due to unfeasible vehicles and drivers who were not in good condition. Therefore we carried out intensive ramp checks to make sure that the brakes, lights and other parts functioned properly. We also asked the managers of the tourism buses to pay attention to the validity of vehicle feasibility test license. I hope both drivers and passengers are aware of the importance of safety so that the number of accidents can be reduced, the Minister said.

For the record, until the news was released, buses that have carried out ramp check have reached 35,812 units, among them 16,492 Inter-City Inter-Province (AKAP) buses, 18,545 City buses and 675 tourism buses. A total of 28,183 buses were roadworthy, while 7,629 vehicles that did not roadworthy were already repaired.

In the meantime, Budi also conducted a sudden ramp check on one of the Lion Air planes at Husein Sastranegara Airport (Bandung, West Java province), with the result showing that all aspects of the plane are in good condition.

Afterwards, the Minister also visited Bandung Railway Station to inspect the condition of the station during its peak season. (Communication Bureau of Ministry of Transportation / EN)