Minister of Energy and Mineral Resources: Government Submits the Management of Mahakam Block To Pertamina 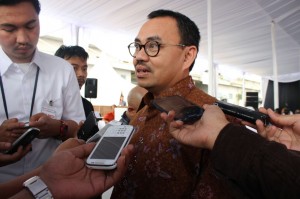 The government has decided to hand over the management of the Mahakam Block in East Kalimantan to PT Pertamina (Persero), which will be completed the contracts in 2017 from Total E & P Indonesia and Inpex Corporation.

“All parties need clarity, the government has given a clear direction, the direction is to Pertamina,” said Minister of Energy and Mineral Resources (ESDM) Sudirman Said told to reporters on the sidelines waiting for the arrival of President Joko Widodo (Jokowi) which will be to Arun , in Lhokseumawe, Aceh, Monday (9/3) morning.

However, how the amount of shares given by the government to Pertamina, the Minister of Energy and Mineral Resources handed in negotiations between SOEs (BUMN) with the previous management block, although admitted that Pertamina asked the management 100 percent by Pertamina or majority.

“I think, since November we’ve talked to both of them. To the Total we convey the signal, as well as to Pertamina, so it should not start from zero at all. So far, Pertamina is able to make proposals because the basics from them, so the relationship between the two should be okay, Sudirman said.

Minister of Energy and Mineral Resources suggested that the transition process of the management of Mahakam Block from the old management (Total) to Pertamina should take place gradually. However, about the percentage he suggested to Pertamina and Total to decide.

Previously, Managing Director of PT (Persero) Pertamina Dwi Soetjipto declared ready to run the government’s decision if appointed to manage oil and gas wells in the Mahakam Block in Kutai, East Kalimantan. Nevertheless, Pertamina would welcome, if there is other party who want to work together to manage oil and gas block, which is still controlled by Total E & P Indonesia.

According to Dwi, the current financial of Pertamina has been very ready to take over the Mahakam Block from Total. Even the calculation of investment funds has also been made.

Pertamina since November 2014 ago also has submitted a written proposal to take over the management of the Mahakam Block. The letter is a reaffirmation of the interest of Pertamina to manage the Mahakam Block that has been submitted to the Government since 2008.

As we know that, the Mahakam block production-sharing contract signed in 1967, which was extended in 1997 for a period of 20 years until 2017. Initially, when the exploration carried out in 1967, reserves (combined proven reserves and potential reserves or known as 2P-ed) oil and gas in the Mahakam Block is large enough at arround of 1.68 billion barrels of oil and natural gas amounted to 21.2 trillion cubic feet (TCF).