Minister of Foreign Affairs: the Settlement of Boundary Issue Should be Resolved Peacefully 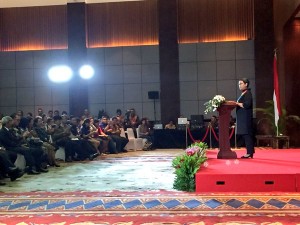 On a press conference that was held to welcome the New Year 2016, at the Ministry of Foreign Affairs, on Thursday (7/1), Minister Retno said that during 2015 Indonesias foreign policy was directed to accelerare the settlement of Indonesias boundary in a peacuful way.

With a roadmap, all negotiations were activated including the negotiation of boundary that has been inactive since 2003. According to the Minister, 25 meetings on boundary had been conducted in 2015, consisting of 9 negotiations on maritime border and 16 negotiations on land border.

Indonesia and Malaysia have appointed Special Envoy to accelerate the negotiation process of maritime border settlement, the Minister said.

According to the Minister, in 2015, ratification process had been done for two border agreements, such as agreement between Indonesia-the Phillipines and Indonesia-Singapore.

On that occasion, Minister Retno also mentioned about the tension between Saudi Arabia and Iran, as well as nuclear test by the Government of North Korea at the beginning of 2016.

Indonesia has intensively communicated with Saudi Arabia, Iran, and other Middle East countries to prevent the situation from getting worse, Retno said.

Meanwhile, concerning nuclear test by Democratic Peoples Republic of Korea or North Korea on last Wednesday (6/1), the Minister expressed her concern. She reminded that the test is contrary to Comprehensive Nuclear Test-Ban Treaty (CTBT) and the spirit of the agreement. The test also violates the obligation of North Korea based on UN Security Council Resolution Number 1718 of 2006, Number 1874 of 2009, and Number 2087 of 2013.

Indonesia calls all parties to respect and obey these UN Resolutions, to restraint, and to prioritize diplomacy as well as dialogue in creating a conducive situation for regional peace, stability, and development.