Minister of Foreign Affairs will Coordinate the Liaison Ministers 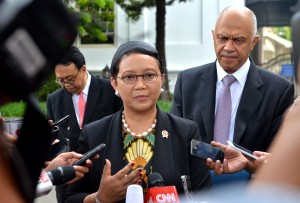 Minister of Foreign Affairs Retno Marsudi argued, the appointment of 12 ministers who got an additional task from the President Joko Widodo to be a liaison between countries is intended to ensure the implementation of the investment coming from abroad.

According to the Minister of Foreign, a lot of foreign investments, which eventually are difficult to implement because of the existing problems in us. Therefore, the President asked, there is one minister who actually guarantee that such investment could actually be realized with good.

“It’s a matter of investment realization. So there will be no overlapping. Precisely this we form a strong team to carry out intensive cooperation with other countries specialized in the field of investment, “said Minister of Foreign, at the State Palace, Jakarta, Wednesday (24/11) afternoon.

The explanation was given by the Minister of Foreign Retno Marsudi respond provision of additional tasks to the 12 ministers of the Cabinet Working as reported previously to be a liaison between countries related investment issues, licensing, and follow-up of cooperation with Indonesia.

Under the Foreign Minister

Answering questions from journalists, Minister Retno Marsudi explained that coordination of the 12 ministerial liaisons is under the Ministry of Foreign Affairs.

“Actually, there is BKPM, Minister of Foreign just coordinating. The key is coordination, there would be no overlapping, “Retno said, adding that the President has always said that the investment realization must be fast. The spirit is for depotal making and ensure that the implementation of the investment carried out.

Cabinet Secretary confirmed that Minister of Foreign Affairs also still plays the key role in the process of negotiation to reach an agreement of economic cooperation and investment between Indonesia and other countries. . (DID/AGG/ES)/Sy.