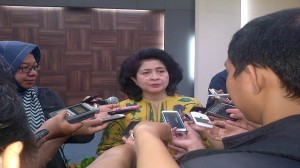 Minister of Health Nila F. Moeloek ensures that Indonesians who just come back to homeland from working in Liberia, the country has deadly epidemic Ebola, are stated to be negative from that virus. Last result from last night is negative. But we still anticipate and look after them, said to the press after plenary court at President Office in Jakarta, Monday (3/11) noon.

Head of Health Research and Development (Balitbangkes) at Ministry of Health, Prof dr. Tjandra Yoga Aditama, Sp.P(K)., MARS., DTM&H., DTCE., says that he was in the same plane with other 29 Indonesian workers who just back from Liberia.

I took flight to Abu Dhabi from Geneva, seven hours of transit in Abu Dhabi, and in the flight to Jakarta from Abu Dhabi I was with 29 Indonesian workers who back from Liberia. We arrive at Soekarno Hatta airport on Sunday (26/10), said Prof Tjandra Yoga via email on Saturday (1/11).

However, according to Prof. Tjandra for cautiousness, those who have fever should be treated in isolation, and the sample should be sent to laboratory at Balitbangkes. He firmly says that to be sure whether it is Ebola or not, and the result would be out 48 hours (at maximum) after the sample received by the Balitbangkes.

Minister of Health Nila F. Moeloek says laboratory results of the two suspects Ebola from Madiun and Kediri are negative. The sample of them are tested for 48 hours with BCL3 in Balitbangkes. According to their medical history, they could be having Malaria.

The Minister of Helath explains, symptom of Ebola could be seen, such as high fever, diarrhea and vomits. In addition, Minister Moeloek urges people to stay alert. Prevention have been taken before Indonesian worker in overseas come back to homeland, and when they arrive at the Soekarno Hatta airport, Cengkareng. We conduct prevention at the quarantine in ports. So when people from endemic places come, they are checked there for two weeks, Nila explains. (Humas Setkab/ES)(Ifp)