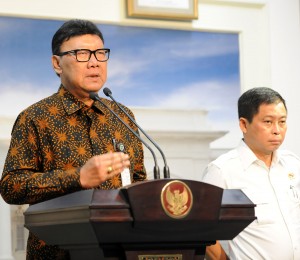 Minister of Home Affairs Tjahjo Kumolo said the implementation of the Economic Policy Package issued by the Central Government would be optimal if the regional governments in both provinces and regencies could accelerate the development of the effective and efficient governance.

Therefore, through Minister for the Empowerment of State Apparatus and Bureaucratic Reform, he added, the Government keep trying to cut many bureaucratic procedures. He said that his Ministry has returned 139 problematic regional regulations which can hamper the investment process, etc.

Related to the regional support for the implementation of the Economic Policy Package issued by the Government, the Minister said that his office will gather the Governor association.

There are 9 Governors who lead the association. We want to ask their suggestion about the licensing procedures in each province. Each province is absolutely various; there is archipelago, special authonomy, etc, the Minister noted.

Furthermore, he said that the President instructed to simplify the licensing process. The important thing is those related to standard and procedures.

According to the Minister, his office has prepared 19 Government Regulations considered as a legal umbrella for bureaucratic obstacles in several regions.

Moreover, he will also emphasize all regional Heads in 44 regencies and 9 municipalities that have not issued One-Stop Integrated Service.

The regions that have not issued One-Stop Integrated Service will be subject to a sanction in the form of allocation fund in 2016, Tjahjo stated.

Minister Tjahjo also instructed all village Heads in all regencies/municipalities to disburse village fund saved in the Bank account of regency/municipality Government.

The village fund including the local budget (APBD) of village must be disbursed with labor intensive mechanism to involve the villagers, Tjahjo stated. (DID/SLN/UNES) (JS/YM/Naster)/Sy.