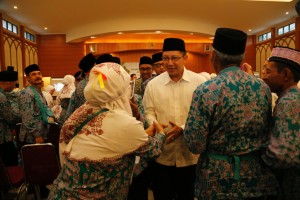 According to Minister of Religion, as the Amirul Hajj of Indonesian Hajj mission he will monitor the organization operational of the Hajj. It is also carrying out the rituals (manasik) guidance for officers and Indonesian pilgrims.

“Amirul hajj also conducts monitoring and evaluation, so that for next year the organization of the pilgrimage could be better,” Minister of Religion said.

While the Director General of Hajj and Umrah Abdul Djamil hope that the tasks of Amirul Hajj delegation goes well and smoothly.

“Kindly praying that the Amirul Hajj group were given health and long life so as to carry out the task as well as possible, and service to pilgrims can be increased than before,” Djamil said.

He also said, as secretary Amirul Haj at this time is Achmad Gunaryo, the Head of Legal and Foreign Cooperation of the Ministry of Religion. As for the members Amirul Hajj are from members of Islamic organizations. (Humas Kemenag/ES)