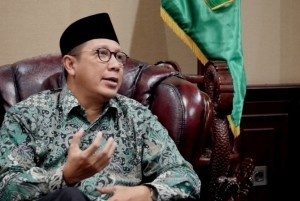 Minister of Religious Affairs Lukman Hakim Saifuddin said that Indonesianpeople uphold religious values and religion becomes the spirit and soul of the nation. Hence, it is reasonable if religious figures have a special place in peoples life. Therefore, the Minister invited all parties to protect their dignity and honor. All of us, particulary this countrys elites, must always uphold religious values, symbols, as well as honor religious figures. In this muslim majority country, we must really protect the honor of ulemas and clerics, the Minister said in his press release in Jakarta, on Thursday (2/2).

The Minister added that they should not be humiliated because the risk is great. It can cause uproar that is contraproductive for the nations unity.The energy is wasted for unnecessary things which can hamper the development, the Minister said.

The Minister emphasized that Indonesia is not a country based on a religion,  but religion has an important position in the history of the nation. Even, religious aspect can be found in Pancasila (Five Principles) and the 1945 Consitution that are the foundations of the country. Bhinneka Tunggal Ika (unity in diversity) contains a strong religious message on the importance of respecting diversity because it is the will of the Almighty God. Unitary State of the Republic of Indonesia is the manifestation of common awareness to always protect the unity of the nation and country because love of country is part of our faith, the Minister said.

Minister Lukman Hakim Saifuddin also invited religious people to restrain themselves from taking provocative actions. He reminded that all people must work in synergy to develop the country. The potential of conflict between the people and the countrys elites must be avoided because it is not productive for the countrys development. Now is the time to unite, the Minister further said.

The countrys elites, the Minister added, work based on the mandate, doesnt betray, and could be a good example. In the meantime, the people give support and trust while keep monitoring their works. Ulemas must be honored by the people because they are the mentors, the Minister said.

Should any problem occur, as a religious people, a person must maintain an attitude of forgiveness. In his view, the Chairman of Indonesian Ulema Council (MUI) who is also the Rais Am of Nahdlatul Ulama Executive Board (PBNU) K.H. Mafur Amin, has given a good example of the importance of forgiving attitude. This kind of attitude must be followed and developed. Thus, hopefully ulemas and the people can work in synergy to improve the quality of life, the Minister firmly said. (Humas Kemenag/ES)(MMB/YM/Naster)