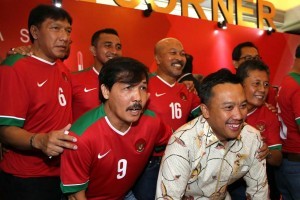 The Minister of Youth and Sports Imam Nahrawi firmly said that the Government will always support the working plans of the Indonesian Football Association (PSSI) that will be created at the 2017 PSSI Congress. A lot of people wish PSSI would be more dignified, professional, and better, the Minister said when officially opened the 2017 PSSI Congress at Arya Duta Hotel Ballroom, Bandung, West Java, Sunday (8/1) morning.

Imam Nahrawi asserted that the Government believes in PSSI and will always support as well as facilitate so both parties can walk together.

This Congress is a reconciliation momentum. I truly hope that this Congress will be able  to solve the existing problems and bring PSSI to a better condition, particularly in organization management, the Minister said.

Previously, the General Chairman of PSSI Edy Rahmayadi explained that the Annual Congress of PSSI is a starting point of the hard work to solve various problems. This Congress will stipulate as well as set up working programs for one year in order to rebuild Governments and football lovers trust.A new PSSI, which vision is to create a professional and dignfied football association, will work hard to build Indonesias football that have experienced the downturn. It will rise and make achievements, Edy Rahmayadi firmly said.