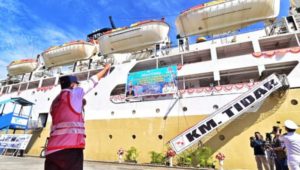 Photo by: PR of Ministry of Transportation

Two centralized isolation ships and four airports will remain on standby until 20 October 2021 or five days after the closing ceremony of the 20th National Sports Week (PON) in Papua, Minister of Transportation Budi Karya Sumadi said.

“I have instructed Director General of Sea Transportation that the two centralized isolation ships should standby in Papua until five days after the closing ceremony of the 20th PON and ensure that all the patients are being treated properly,” the Minister said on Tuesday (12/10).

Currently, as many as 15 people, consisting of 14 people from the PON cluster and one person from the general cluster, are being treated on the KM Tidar ship.

“The two isolation ships are expected to help control the spread of COVID-19 in Papua,” he said.

The ships, the Minister said, can serve as alternative isolation facilities for COVID-19 patients without symptoms as the ships will be more monitored when compared to self-isolation at home. In addition, isolation on the ships may limit the potential spread of COVID-19 because the patient mobility will only be carried out on the ships.

The Ministry has also coordinated with airline operators to facilitate the departure of athletes and officials by implementing strict health protocols in the four airports.

“We have ensured that the departure of the athletes via airports is in accordance with strict health protocols implemented by the airports and airlines. We have also imposed the use of PeduliLindungi application and ensured that those who depart have vaccination certificates and [negative] PCR tests,” he said. (PR of Ministry of Transportation/UN) (FI/MMB)