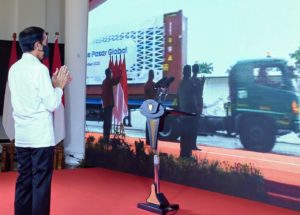 The COVID-19 pandemic in Indonesia that has been under control has improved manufacturing industry performance, marked by the country’s manufacturing purchasing managers’ index (PMI) that is in the expansive zone, according to Coordinating Minister for Maritime Affairs and Investment Luhut Binsar Pandjaitan.

Indonesia’s manufacturing PMI increased from 43.7 in the previous month to 52.2 in September 2021, which is one of the best in ASEAN.

“Once again, Indonesia’s PMI performance is also one of the best in ASEAN,” the Coordinating Minister said.

According to Luhut, the pandemic that has been under control also boosted the revival of consumer economy in a short time, adding that the consumption index in several regions has come close to the index in normal condition.

“The consumption index of East Java province, Special Capital Region of Jakarta, and Special Region of Yogyakarta has come close to [the index] in prepandemic condition,” he remarked.