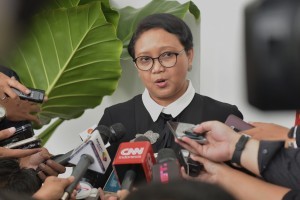 Emir of Qatar paid a reciprocal visit to Indonesia after President Joko Jokowi Widodos visit to Qatar two years ago, and this is part of a series of his agenda to visit several Southeast Asian countries. This was conveyed by Minister of Foreign Affairs Retno LP Marsudi after accompanying President Jokowi to receive a state visit of Emir of Qatar Sheikh Tamim bin Hamad Al Thani at the Bogor Presidential Palace, West Java, Wednesday (18/10).

“The talks with the President focused on economic cooperation. The President discussed two things in particular. The first is about infrastructure issues. The second is about tourism. Meanwhile, there has been a long-standing cooperation in the fields of gas and energy, but gas sector has been the focus. So the point is for infrastructure,” Minister Retno said.

In the bilateral meeting, the Minister expressed that President Jokowi explained about infrastructure development in Indonesia, then what is being prioritized. The Minister added that Emir of Qatar is interested in investing, for example, regarding the port development. “Similarly, when it comes to tourism, we discuss about 10 New Bali. This has been continuously delivered by the President to various parties. This is also repeated by the President,” Minister Retno added. Specifically on energy, the Minister expressed that the focus is on building power stations as a follow-up to President Jokowi’s visit two years ago.

The Indonesian Government, the Minister added, is trying to invite Qatar to work together in the form of such projects. The Minister gave an example that She signed a joint commission. Furthermore, the joint commission will immediately work to follow up the talks agreed between the two Heads of States, that is, negotiating a Bilateral Investment Treaty (BIT).

When asked by reporters about the crisis in the Gulf countries, the Minister expressed that Indonesia’s position is consistent in the sense that since the first day of the crisis, it has been communicating with various parties. “Qatari Foreign Minister also contacted me, I also communicate with Saudi Arabia, with UAE, and so on. So, basically, we have agreed that peaceful solution is the best,” Minister Retno added.

Conflict, let alone war, the Minister continued, will not bring benefits to anyone. The Minister added that President Jokowi always emphasized the importance of unity of the ummah. “We said that we also communicate with Kuwait because the Emir of Kuwait is also trying to carry out its mediation. So our position is consistent from the first day until today,” Minister Retno concluded. (SM/OJI/DID/GUN/EN) (MUR/YM/Naster).