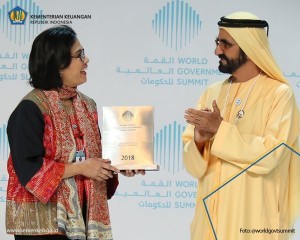 This Award, which granting is started in 2016, is given to one minister amongst all  ministers in the world. This prestigious award organised in partnership with Ernst and Young.

The Minister also dedicated this Award to 257 million Indonesian people and 78,164 personnels of the Ministry of Finance who have worked hard to manage state finances with high integrity as well as commitment in order to create a just and even peoples welfare.

The Ministry of Finance has launched a number of policy reforms that can lead fiscal policy to an inclusive and sustainable development. In addition, bureaucratic reform carried out in this Ministry has resulted in positive outcomes.

The World Government Summit is an annual Summit held in Dubai, UAE, that gathers a number of government leaders from all over the world in a global dialogue forum. The aim of this forum is to improve the quality of life of 7 billion world population.

This forum also becomes a place for government officials, policy makers, experts, and leaders from private parties to share experiences and knowledge such as, public policies, government, technology, innovationas well as to see the future trend and its implication. The Summit was attended by more than 4,000 participants and 90 speakers from 150 countries as well as international institutions.

The report of this Summit will be published by Oxford Analytica, McKinsey, Harvard Business Review and will be posted in the website of World Government Summit https://www.worldgovernmentsummit.org/home. (Biro Komunikasi dan Layanan Informasi Kemenkeu/EN)(MMB/YM/Naster)