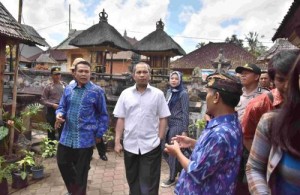 Minister of Villages, Disadvantaged Regions and Transmigration Marwan Jafar called on all sides to together help accelerating  disbursement of village funds .

According to the Minister, if the village funds have been used, traffic for goods and service can begin and economic activities can begin from villages.

All sides must sit together – from regents to the governors – to accelerate disbursement of village funds, Marwan said during a dialog with district heads and regional governments at Griya Gubernur, Palembang, South Sumatera on Friday (28/8).

The minister also said that if disbursement of village funds fails or the funds are not used maximally, it will create social-political impacts in the society and will also lower public trust in 74.093 villages to the governments seriousness in implementing the Law on Villages.

Speaking before 13 regents and 1 mayor, the Minister also asked regional secretaries in provinces to give instruction to accelerate disbursement of village funds immediately.

District heads must use the funds as soon as possible. If the funds have not been distributed, I ask regional secretaries to give instruction to distribute the funds to each villages, Marwan said.

On that occasion, he also reminded regents not to complicate regulationson disbursement of village funds because if the disbursement is still difficult due to regulations, the funds will not be absorbed well.

Once again, I ask for the commitment of district heads to accelerate the disbursement process of village funds. If a regent does not distribute the fund, he/she breaks the law. Therefore, it must be distributed soon, Marwan stated.

In his capacity as the Minister of Villages, Disadvantaged Regions and Transmigration, Marwan further said that he would also issue a circular letter so that the disbursement of village funds can be done without going through complex regulations.

This week we will issue a circular letter so that there will be no a complex regulation to use village funds, he said.

For the record, Marwan reported that until today, only 20 percent of village funds have been distributed to villages; thus he called for the simplificationof administrative requirements.

(We have ) to simplify the requirements and the funds can be used soon, he added.

Use The Funds Well

For the villages that have received village funds, Marwan Jafar instructed them to manage and use the funds immediately.

Do not be afraid to use the funds to develop the village. Use them according to the needs, Marwan said in a briefing to village officials in Bangli Regency, Bali, on Sunday (30/8).

Marwan went on to say that the central government would ease the requirement to receive village funds.

However, he warned against misusing  the funds.

Furthermore, he also said that so far the central government through Ministry of Finance had distributed the village fund amounting to approximately Rp 20 trillion to all regencies all over Indonesia since a few months ago. However, it is about 30-36 percent of the fund distributed, he said,

It (budget absorption) is still very low. If there is a village road needs to be prioritized, do it immediately. Do not postpone it.Let me say it once again, do not be afraid, Marwan concluded.

Speaking to village heads, Marwan Jafar said that the President had instructed National Police Chief (Kapolri) and the Supreme Court not to criminalize administrative issues and said that a regulation is currently prepared to simplify the requirement to disburse and use the funds.