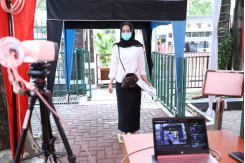 The test taker of basic competency selection for CPNS of 2021 (Photo by: Ministry of State Apparatus Empowerment and Bureaucratic Reforms PR)

In a bid to ensure the fairness of basic competency selection test for civil servant candidates (CPNS) which begins today, Thursday (02/09), Minister of State Apparatus Empowerment and Bureaucratic Reforms Tjahjo Kumolo has warned test takers to be wary of the so-called middleman.

“There must be so-called middleman (in the test) every year. Be cautious!” Tjahjo said during his inspection on the test site at the State Civil Service Agency (BKN) office, Jakarta.

According to the Minister, some people took advantage of the momentum of selection test to target victims. Thus, he ordered the regional office and the Technical Management Unit (UPT) of BKN to remind test takers, parents of test takers, and the public to be cautious of potential fraud.

“The test must be carried out in a consistent manner. We must also be careful in explaining to provide clear, fair, and accurate understanding,” he added.

In the meantime, Acting Head of BKN Bima Haria Wibisana said that test takers in Java, Madura and Bali are required to have received COVID-19 vaccine at least once. Meanwhile, in other regions, the vaccine requirement is determined by the Task Force in their respective regions.

“(It shows that) the regional governments want to serve the public as good as possible,” he remarked.

For the record, the 2021 basic competency selection test for civil servant candidates is carried out at BKN Regional Office, BKN’s UPT Office, and at several independent locations determined by BKN throughout Indonesia. To ensure a transparent and accountable test, BKN also provides the live scores of the test which can be seen on BKN CAT Official YouTube channel. (Ministry of State Apparatus Empowerment and Bureaucratic Reforms PR) (GWH/MUR)