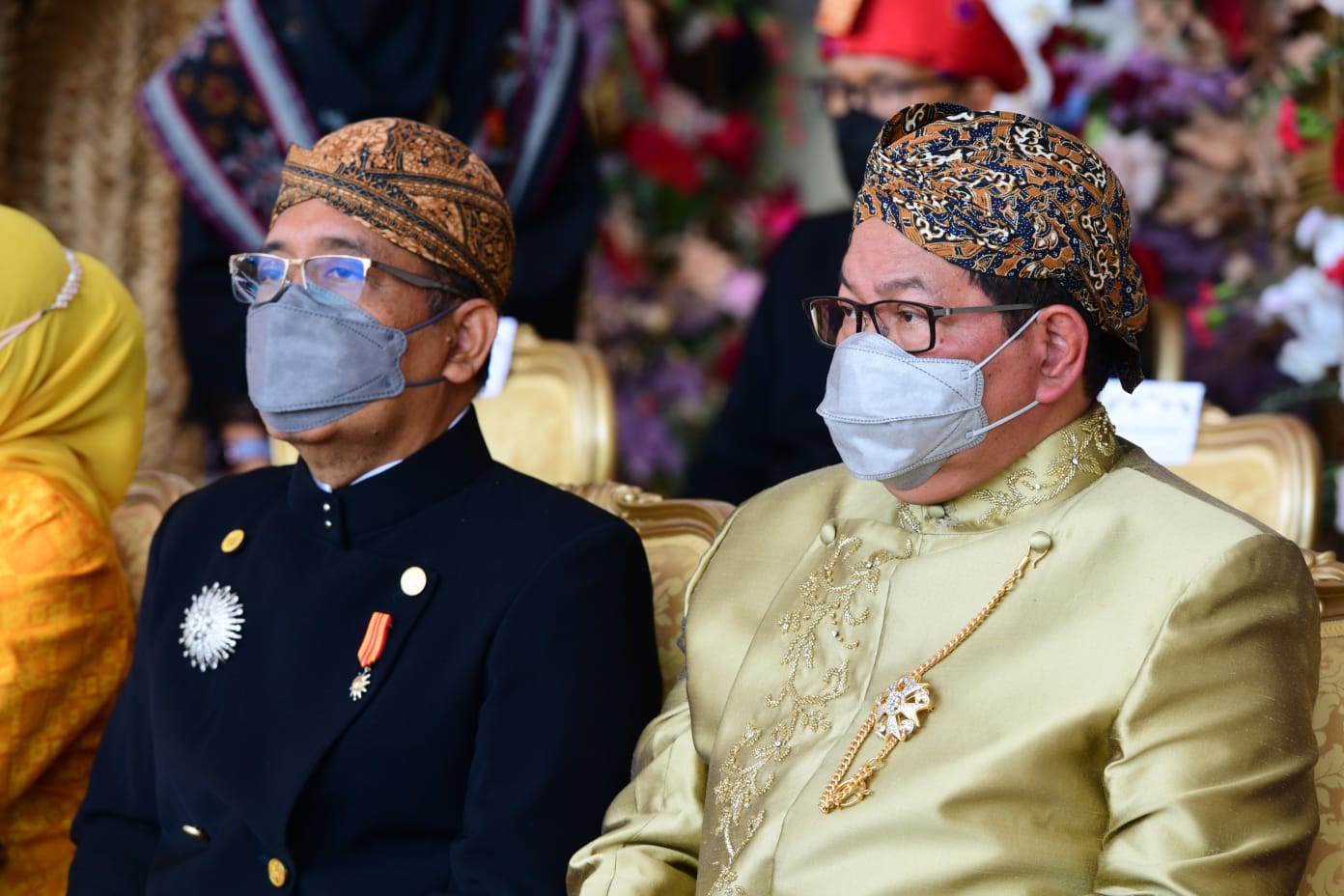 Minister of State Secretary Pratikno and Cabinet Secretary Pramono Anung at the Commemoration of the 77th Anniversary of the Independence Day the Republic of Indonesia, at the Merdeka Palace, Jakarta, on Wednesday(08/17) .(Photo: Bureau of Press, Media, and Information of Presidential Secretariat)

President Joko “Jokowi” Widodo on Wednesday (08/17) wore dolomani traditional clothes from Buton regency in Southeast Sulawesi province during the Commemoration of the 77th Anniversary of the Independence Day of the Republic of Indonesia.

Following the President, Ministers of the Onward Indonesia Cabinet also participated in the commemoration event by wearing traditional clothes from various regions across Indonesia.

According to Budi, he chose the traditional clothes to show the preparation on relocating the capital of Indonesia to East Kalimantan province.

“We need to prepare so when we move to East Kalimantan province, we know what traditional clothes to wear,” he said.

In the meantime, Coordinating Minister for Maritime and Investment Affairs Luhut Binsar Pandjaitan wore traditional clothes of Bali province. Luhut said the clothes were chosen to support the G20 Summit that will take place in Bali coming November.

Minister of Public Works and Housing Basuki Hadimuljono also joined his colleagues by wearing traditional clothes of the Sasak tribe, Lombok Island, West Nusa Tenggara province as a gesture to support for super priority tourist destination in Lombok Island launched by the Government.

“I was thinking of Lombok one of the super priority tourist destinations launched by President Jokowi and as the President’s assistant who is in charge of revamping and renovating infrastructure in Lake Toba, Borobudur Temple, Lombok Island, Labuan Bajo tourist center, and Kupang city, I take part in promoting Lombok, Mandalika,” Basuki said.

On that occasion, the Ministers also expressed their hopes for Indonesia in the future.

In line with the 77th Anniversary of Indonesia’s Independence Day themed “Recover Faster, Rise Stronger”, Cabinet Secretary Pramono Anung expressed belief that Indonesia will be able to rise up and become a great nation.

“We believe Indonesia will become a great nation, a strong nation, a nation of fighters, and a timeless nation,” Pramono said.

Echoing a similar sentiment, Minister Basuki Hadimuljono expressed hopes that the 77th Anniversary of Indonesia’s Independence Day can mark a spirit of optimism in striving for a better future for Indonesia.

“We must be optimistic. As a nation of fighters, fight does not mean a fight in the sense of war, but we must be fighters who have a fighting spirit like our national heroes in 1945. Without them, we could not be an independent nation.  Even now, we must be fighters for a better future of Indonesia,” Basuki said.

Meanwhile, Minister of Health expressed hope for the Indonesian people to live a healthier life, so they can do normal activities.

Coordinating Minister for Maritime and Investment Affairs also expressed hope that Indonesia will be a better and greater nation.

“We hope Indonesia will be even greater because we have proven that Indonesia is a great nation – a nation that can solve complex problems such as COVID-19 pandemic, and now we are also praying for our economy so that everything can improve under the leadership of President Joko Widodo,” Luhut said. (MAY/ Bureau of Press, Media, and Information of Presidential Secretariat/UN)(AW/LW)