Ministers to Meet with Paper and Palm Oil Industries Association 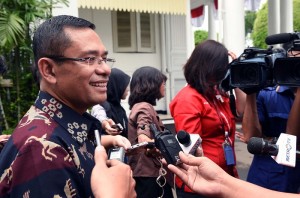 Minister of Industry responded to reporters questions, at the field of Merdeka Palace, Jakarta, on Tuesday (2/2) afternoon

The meeting is conducted as a response to many inputs delivered in a meeting between the Indonesian Palm Oil Producers Association (GAPKI), the Indonesia Pulp and Paper Association (APKI), the Association of Indonesian Forest Concessionaires (APHI), and President Joko Jokowi Widodo, at Merdeka Palace, Jakarta, on Tuesday (2/2) morning.

Those are our main strategic industries and they are entirely local industries, Minister of Industry Saleh Husin said to the reporters.

The Minister asserted that pulp and paper industries are the mainstay of the economy, whose products sourced from the forest, and products from upstream to downstream are available in Indonesia.

If we compare it with our textile industry which generate US$ 13.5 billion of foreign exchange, yet we still import raw materials worth US$ 8 billion. Once there is no import on pulp industry, the industry will be entirely local, from upstream to downstream, Saleh said.

Therefore, according to Saleh, the Government considered it is necessary to have discussion on the ways to increase production, particularly in peoples dependent plantation. Saleh reminded all that currently 43 percent of plantation areas belong to the people and plasma (partnership).

Foreign exchange sourced from palm oil industry and its derivatives in 2014 are around US$ 21.7 billion. The number decreased to US$ 18.6 billion in 2015. Meanwhile, the cost for direct labor is around 6 million, Saleh Husin explained.

With low bio-diesel absorption, Saleh Husin said that this is what we continue to promote and has become mandatory to be implemented so it will bring high absorption and will raise the price of Crude Palm Oil (CPO).

It is necessary to be implemented, moreover we have General Service Agency (BLU) for palm oil that can be used to conduct replanting in order to rejuvenate the old palm trees, the Minister said.

Regarding the implementation of a policy on bio-diesel (B) 20, Saleh Husin said that he will coordinate with the related sides, namely the Association of Indonesian Automotive Manufacturers (Gaikindo) so that automotive could be in line with the Governments policy, namely to make B20 policy could run well.

Once the absorption is high, the price will rise. Once the price rises, it will bring benefits to the people who own 43 percent of palm plantation in general, both dependent and plasma plantations. Their income will increase, the Minister said.

The Minister also called on people to continue mantaining the derivatives of downstream industry. Crude Palm Oil (CPO) export is currently slowing down due to the export are mostly absorbed for derivatives industries.

This is what we always promote by giving stimulus, for example stimulus in fiscal for CPO derivatives industries, the Minister explained. (FID /ES) (RAS/EP/YM/Naster)