Ministries/Institutions Must Collaborate with Regional Governments to Resolve Land Conflicts 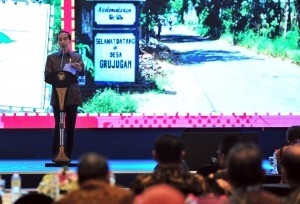 President Jokowi delivers his remarks at the lauching of One Map Policy Geoportal and the 2018 National Infrastructure Progress Book, at Bidakara Hotel, Jakarta, Tuesday (11/12). (Photo by: Jay/PR Division)

In a bid to follow-up the launching of One Map Policy Geoportal, President Joko Jokowi Widodo instructed ministries/institutions to add more thematic maps in order to address the issue of overlapping land-use in the country.

Use the Overlapping Indicative Map of Thematic Geospatial Information (IGT) to resolve overlapping land-use, President Jokowi said in his remarks at the lauching of One Map Policy Geoportal and the 2018 National Infrastructure Progress Book, at Bidakara Hotel, Jakarta, on Tuesday (11/12).

The President asserted that every ministry/ institution should implement One Map Policy in their spatial-based development planning. He added that cooperation and collaboration between ministries, institutions, and regional governments must be established to resolve overlapping issues.

Sectoral ego must be fought together. If we collaborate, we can solve many issues, President Jokowi firmly said.

Therefore, the President instructed regional heads to accelerate boundaries setting for villages and sub-districts because there are many boundary issues that have not been resolved. The mapping can be coordinated with the Geospatial Information Agency (BIG), the President said.

President Jokowi also instructed the BIG to compile an effective updating mechanism and prepare a basic map with a larger scale so that ministries, institutions, and local governments can start making a thematic map in larger scale.

On the same occasion, Coordinating Minister for the Economy Darmin Nasution in his report said that One Map Policy is one of major policies that is needed and vital for a good development planning that will support the futures economic development and growth.

He asserted that the Government  had stipulated a program to accelerate One Map Policy in 2016 through the issuance of the 8th Economic Policy Package and Presidential Regulation Number 9 of 2016.

One Map Policy is one of prority programs  in the Nawacita (nine programs of President Jokowi and Vice President Jusuf Kallas Administration), which is aimed at providing one accurate and accountable map as a reference for development planning, infrastructure provision, land rights and permits, as well as several other national policies, Darmin said.

According to the Minister, 83 out of 85 thematic map plans from 19 ministries/institutions and regional governments in 34 provinces have been compiled and integrated. However, the other 2 maps have not completed yet, namely the National Sea Spatial Plan Map (RTRLN), which is being produced, and the Subdistrict/Village Border Map, which is being compiled by the BIG and to be followed up by regional heads to stipulate it. (DND/JAY/ES)