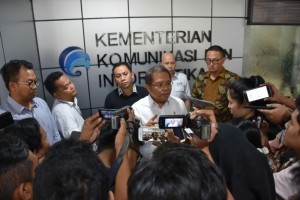 Minister of Communication and Informatics Rudiantara.

Ministry of Communication and Informatics has blocked a total of 450 URLs on social media and sites that show photos and videos of act of violence before Persib vs Persija match at Bandung Lautan Api Gelora Stadium (GBLA), Bandung, Sunday (23/9).

The effort to suppress and punish the spreaders of negativity on the internet, according to the Minister, needs to be carried out by blocking the content and enforcing the law.

These efforts are part of handling downstream aspects to realize healthy use of internet. We also need to carry out dissemination to the public to get optimal impact, Rudiantara said.

In addition to the blocking, the Minister said he will meet with PT. Persib Bandung Bermartabat Marketing Director M. Farhan to discuss the violence that occurred and urge Persib supporters who use social media to not to distribute videos and photos of the victim.

There are indications of provocation by some of club supporters. For example, they said if you are true supporters of club A, you must have courage to beat supporters from another club then make it viral on social media. We must prevent this, Rudiantara said.

He also urges the public not to be the spreaders of negativity on social media and sites. Concerning take down content, the Minister said that he needs time to reviewing each terms and conditions as well as rules on each platforms.

Previously, the Ministry had asked YouTube, Twitter, Instagram and Facebook to delete all videos and photos related to the victim. It is feared that the videos and photos of the persecution can cause unrest among the public.

For the record, one of the Jakmania (Persija fan club) members Haringga Sirla was beaten up by dozens of Persib supporters in GBLA Stadium parking area, before the match between Persib vs Persija began that led to the death of Haringga.