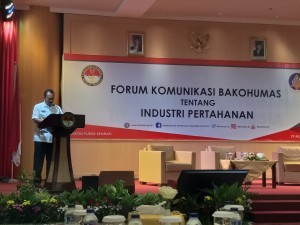 Ministry of Defense is committed to using the skills of the nation’s best sons and girls in developing domestic defense industry. This is intended to generate new ideas to creating superior products that can be used by the Indonesian National Defense Forces (TNI) personnel.

In the meantime, the Director General of Information and Public Communication of Ministry of Communications and Informatics Rosarita Niken Widiastuti, said in her remarks that we must be proud because this nation is able to develop its own defense equipments because Indonesia has a defense company, namely PT. Pindad.

Niken further said that PT. Pindad has been able to develop tanks, combat vehicles, and sophisticated weapons that are not only used domestically but also to be exported. This good news needs to be disseminated to the community in order to promote the programs, products, and weapons made by PT. Pindad, Niken said.

Also attending the event were the Managing Director of PT. Pindad Ir. Abraham Mose, M.M., Associate Analyst of the Directorate General of Potential Defense of Ministry of Defense Colonel Anang Setiawan, S.T., M.T., and 35 representatives from other ministries/institutions. (RSF/HEN/ES) (GWH/MMB/Naster)