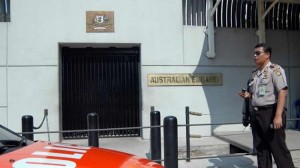 Ministry of Foreign Affairs of the Republic of Indonesia respond to the emergence of Australian travel advice that asks its citizens to raise awareness in Indonesia, and security warnings from the US Embassy in Jakarta on potential threats related to the hotels and banks of USA in Surabaya, the last few days.

“We have expressed the attitude, please read the twitter Ministry of Foreign Affairs,” said Retno told reporters when she would follow the Plenary Cabinet Meeting in Jakarta, Wednesday (7/1).

The US Embassy also advises all US citizens residing in or outside Surabaya to make setting in their mobile phones, in order that they get an early warning about the threat of security provided by the US Embassy.

While the Ministry of Foreign Affairs and Trade of Australia (DFAT) asked Australian citizens to increased vigilance in Indonesia, especially in Bali, following the increased of the threat of terrorist attacks. DFAT also warns that Indonesian immigration officials will likely not allow entry of Australians who have a criminal record.

Related to have mentioned the name of Surabaya in a warning by the US Embassy in Jakarta, the Mayor of Surabaya, Tri Rismaharini, says that she had coordinated with the ranks of the military (TNI) and police (Polri) to respond to the news.

While the Coordinating Minister for Political, Legal and Security Tejo Edhy Purdijatno said, warning that delivered by Australia’s Foreign Ministry was only following a warning issued earlier by the US Embassy in Jakarta, and is not meant to indicate the existence of a terrorist threat in Indonesia.

So far, Tejo said, there are no reports from the State Intelligence Agency (BIN) and the police about the threat of terrorism in Indonesia. However, he asked the public and officials to be more vigilant. (WID/ES)