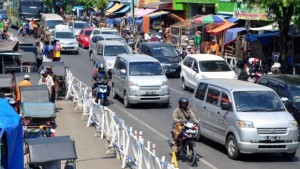 Although in some places, there are still barriers, the Ministry of Public Works and Public Housing (PUPR) confirms that already done the preparation for the homecoming (mudik) infrastructure, especially road infrastructure with the maximum.

“The process of preparation of homecoming we have done with maximum, in some places there was indeed a barriers and a few unfinished projects already we stop their work, we have seen also the effectiveness of toll Cipali (Cikopo-Palimanan toll), then the road is no longer a problem, but more to the service problem in Toll Gate,” Secretary General of the Ministry PUPR Widjojono Taufik said, in of Jakarta, Monday (13/7) night.

Related there are constraints in the Cipali Toll Gate, according to Taufik, the Toll Road Enterprises (BUJT) concerned shall provide the effort with the term “proactive” or by providing a toll card to the driver when the queue occurs, which essentially shorten the time of the transaction at the tollbooth.

Likewise in Brebes, according to Taufik, already expected, there will be a buildup of dense enough, especially to go out in Pejagan. “We’ve been anticipating the opening of the emergency lane to East Brebes, as the evenings cannot be used, now we have seen there is accumulation at the junction after the exit Pejagan toll, this being the things that become our evaluation in the future,” Taufik added.

Meanwhile, Director of Road Network Development, Directorate General of Highways, Ministry of PUPR Soebagiono said, with the operation of the Cipali toll, the volume density of travelers who pass through Pantura route is reduced. It affects the cost of national roads maintenance in Pantura route.

“Handles the traffic density in Java, through the toll roads, the Pantura road maintenance budget is reduced, the cost can be reduced up to 40 percent,” Soebagiono said.

According to Soebagiono, Pantura road repair budget in the past few years range from USD 1.1 to 1.6 trillion. With so many highway projects that unite the Trans Java system, Ministry of Public Works and Public Housing sure can reduce road maintenance budget in Pantura.

Taufik re-explained, with reduced maintenance and then Ministry of PUPR will have the opportunity to use the budget in other places in Pantura and even outside of Java, which needed a greater investment. (BK PUPR/ES)