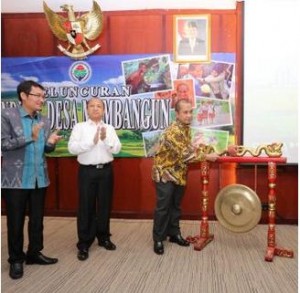 Minister Marwan Jafar asserted that the IDM is launched to lay an initiative and to strengthen the peoples capacity as a fundamental basis in the village development and empowerment process. The IDM is expected to strengthen the accomplishment of the National Medium Term Development Plan (RPJMN) for 2015-2019.

Once the index is used as a reference to perform development affirmation, integration and synergy, according to Marwan, a prosperous, just, and independent condition of the people in the  villages shall be able to be materialized.

It could be a reference for the Government to reduce the number of underdeveloped villages and to boost the number of independent villages in Indonesia, the Minister said.

According to Marwan, up to this moment, there are 5,000 underdeveloped villages. The Minister hopes the number of independent villages in Indonesia in 2019 will increase to 2,000.

Marwan added that people empowerment has become the main concentration, a strategic starting point to create a qualified participation and to improve knowledge and skills. Thus, empowered society is an important asset in supporting the spirit of Village Law that places the village as the subject of the development.

By becoming the subject of development, the village will become an entity which potentially can juxtapose the role of the State in developing the nations welfare, prosperity, and sovereignty both in national and international perspectives, Minister Marwan said.

If the trend of urbanization carries on, in 2025, 65 percent of Indonesian population is estimated will live in the city, he said.