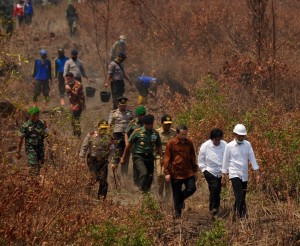 After visiting several cities in South Kalimantan from Wednesday to Thursday (23-24 September), President Joko Widodo decided to continue his working visit to Central Kalimantan to monitor forest and peat land fires which caused haze calamity in the province and postpone his working visit to North Sumatera to monitor the relocation of the refugees of Mount Sinabung’s eruptions.

A member of the presidential communication team, Ari Dwipayana, in his press statement on Thursday (24/9) said that after performing Eid-ul-Adha prayer at Al Karomah Grand Mosque, Banjar Regency, South Kalimantan, on Thursday (24/9), the President and First Lady Iriana Joko Widodo, were scheduled to continue the working visit to North Sulawesi. However, after the prayer, President and his entourage monitored peat land fires in Kapuas and Pulang Pisau Regencies, Central Kalimantan which was located 130 km via land route from Banjar Regency.

According to Ari, President Joko Widodo thinks he needs to directly monitor the forest and peat land fires in Central Kalimantan because of the emergency level in the area.

By directly monitoring the control of forest and peat land fires, President wants to ensure that all parties have taken action together, Ari Dwipayana said.

The postponement of President working visit to Karo, North Sumatera does not mean that President Joko Widodo did not want to monitor the handling of the victims of Mount Sinabung’s eruptions.

He also mentioned that President Joko Widodo still monitors the progress, he even ordered Pangdam I (Commander of Military Area I) Bukit Barisan and the head of the Task Force for the Acceleration of Relocation of Mt Sinabung Eruptions Victims in Karo Regency, North Sumatera Province to immediately prepare the relocation process.

The President is still going to visit the Sinabung refugees in his next work visit, considering the handling of areas in Sinabung is targeted to be fully completed by the end of 2015, Ari said.