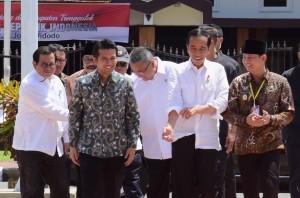 It is because based on the Governments survey, 85 percent of the community is satisfied with the management of the Village Fund and they consider that the fund brings benefits to the larger community in general and also the villages, President Jokowi said in his directives at the 2019 Dissemination of the Priority in Using Village Fund at Trenggalek Regency Square, East Java, Friday (4/1).

In total, the Government until December 2018 has disbursed Rp187 trillion to all villages around the country, the President firmly said.

President Jokowi has also instructed the people to use Village Fund to procure goods or services within the scope of the village and if they cannot get it from the village, they can go to the neighboring village or other villages as long as it is within a sub-district area.

Because we hope the fund to only be circulated in the village until the end of this year. Keep it circulating within the village, the President said adding that he did not want the money, which has been allocated for villages, to be spent in Jakarta

On that occasion, the Head of State also asserted that the Government will change its priority from infrastructures development such as irrigations, bridges, and retention basins which has been implemented during the past four years, to economic empowerment and innovation.

President Jokowi cited an example of the development of tourist village in Ponggok Village, Central Java that generates Rp14 billion of annual income from managing a spring into water recreation site. There are places to rent diving equipment and small food stalls that make the village generate Rp14 billion per year, he said.

The President also called for the development of facilities and infrastructures to support villages with tourism potentials such as spring or beach. He also reminded people about the importance of marketing. If you still feel unsure about the idea of tourist village, do not dare to make one because it is such a waste of money. Be careful, you must calculate it first to know the profit and loss, the President said.

President Jokowi also expressed appreciation for the establishment of Village-owned Enterprise (BUMDes) and instructed the BUMDes officials to focus on developing one or two sectors. (RSF/OJI/UN/RAH/ES)