MPR Delivers a Plan to Amend the Constitution to the President 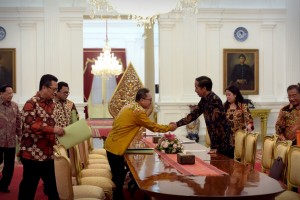 President Jokowi receives the Speaker and Deputy Speakers of the Peoples Consultative Assembly (MPR) at the Merdeka Palace, on Thursday (14/4) afternoon

On the consultation meeting, the Speaker of MPR Zulkifli Hasan said the opinion to amend the Constitution was delivered to the President.

According to Zulkifli, MPR was suggested to take several steps, because it needs carefulness to amend the Constitution.

Zulkifli admitted that to amend the State guidelines, it needs some discussions with various circles, including universities, state administrative law experts, ministries/institutions, regional governments, and also it needs to conduct a public hearing.

Zulkifli mentioned that all fractions at the MPR have agreed to amend the Constitution. Then, they will take some steps and carry it on at the Regional Representatives Council (DPD) groups.

Therefore, we need to conduct a joint meeting and a Focus Group Discussion (FGD) with 50 universities to discuss this matter from economic, political, security, social, cultural and administrative law viewpoints.

Zulkifli further said that the MPR, as the peoples home, accepts all circles and their opinions. Some circles said that the State Policy Guidelines (GBHN) is good, but other circles want to amend it; therefore, we took the solution that saying the State guidelines is needed.

In the press statement, Zulkifli also said that during our 18-years of reform, somethings are missing from the development of national character, the concept of nationalism, patriotism, national fraternity, as well as the Four Pillars of MPR.

So, there are something missed during the 18 years, which is the lack of national spirit. Moreover, young generations do not fully understand about Pancasila and national symbol, Zulkifli said.

Therefore, Zulkifli added, the Speakers of MPR have delivered the importance of institutions, which together with the Central Government, Government at regencies, cities, provinces levels, and all parties can massively disseminate Four Pillars of MPR or four basic concepts of the life of the people and the nation.

Zulkifli also told the President about the status of Merdeka Building located in West Java. Zulkifli said that the building belongs to MPR but managed by local government.

We must resolve this issue and process the certificate, otherwise the MPR is at risk not to obtain an Unqualified Opinion (WTP) status from the Supreme Audit Agency (BPK). Thus, we need to clear up the situation that obstructed by the Presidential Decree (Keppres) Number 75, Zulkifli explained.

On the occasion, Zulkifli also invited President Jokowi to attend MPRs Annual Session, Bung Karno Speech Day to be held on 1 June at Merdeka Building, Bandung, and the Constitution Day on 18 August at the MPR building.

We hope the President and Vice President could attend the event. President Jokowi has agreed to attend and he will deliver a speech at the event, Zulkifli said.

The meeting was attended by the Speaker of the MPR Zulkifli Hasan as well as Deputy Speakers of the MPR Oesman Sapta, Hidayat Nur Wahid, Evert Ernest Mangindaan, and Mahyudin. (FID/ES) (RAS/MMB/YM/Naster)