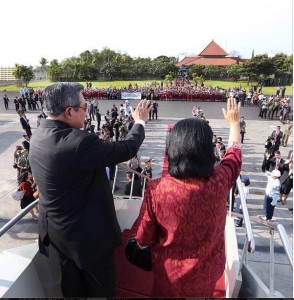 President Susilo Bambang Yudhoyono (SBY) and First Lady Ani Yudhoyono could not resist their emotion. There were tears in their eyes as they received flower arrangements from two students: these were flowers of farewell.

This unusual occasion took place on Friday (10/10) afternoon at Ngurah Rai Airport, Bali. A group of TNI/Polri members presented some songs accompanying the steps of the President and the First Lady as they left VVIP room towards the aircraft, which would take them back to Jakarta.

Not far from it, dozens of people surrounded the President. They, among others community were airport employees, TNI/Polri members, scouts, and students.

From the crowd, two elementary students suddenly gave the flowers of farewell. The President and First Lady received the flowers. There were no words spoken. Their eyes were filled with tears.

Previously, before the arrival of the Presidents entourage, hundreds of people were lining the street of Bali-Mandara. Red and White flag were waved welcoming the President.

As if, they were saying a farewell. Seeing the people lining the street, the Presidents entourage slowed down. The President opened his car windows and waved hands. People greeted the response from the President and First Lady by calling the name of the President.

A strong emotion also showed when all staffs of the palace held a farewell with the President and First Lady. A number of staffs could not hold their tears when the President apologized for all the mistakes, which might happen in ten years of interaction. A farewell of the loved ones was always emotional.

The President would end his tenure on 20th October, after 10 years of leading Indonesia. For the people in Bali, President left a deep memory.

When Bali Bomb tragedy occurred in 2005, the economic condition of the people in Bali which mostly depended on tourism had sharply decreased. Foreign tourists were worried to visit Bali. Some hotels closed and economic activities were sluggish.

The President continuously supported the progress in Bali. Bali-Mandara toll road lying above the sea had been built and used for ground traffic movement. Ngurah Rai International Airport was renovated and stately stood.

The tenure of the President would end on 20th October. For the President who was directly elected by the people for two elections, the visit to Bali this time might be his last visit as the President of Indonesia.

After his service as President was over, the President only had simple request to the people in Bali, Should you meet us somewhere, please greet us, even though we might forget your names and faces. Our companionship should not   be broken. God the Omniscient, if we are kind to people, then God will repay our kindness.