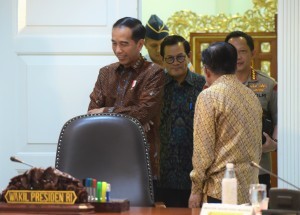 Mismanagement of transportation system and and traffic will further worsen traffic in Greater Jakarta, President Joko Jokowi Widodo has said.

However, the President expressed optimism that the operation of Mass Rapid Transit (MRT) and Light Rail Transit (LRT), as well as the existing services such as TransJakarta, airport trains, and the commuter line will help ease traffic congestion in the area.

President Jokowi went on to say that several parties are in charge of road management in Greater Jakarta such as Ministry of Public Works and Public Housing, DKI Jakarta, Banten, and West Java provincial administrations; hence, road management is no longer integrated and road maintenance also often overlaps.

The President also expressed hope that once the constructions of MRT and LRT are completed, and along with the existing Transjakarta, the public can be encouraged to use mass transportation. So, the number of cars on the road can be significantly reduced, he said.

Data from the National Development Planning Agency (Bappenas) shows that traffic congestion in the Greater Jakarta has caused Rp65 trillion of annual economic losses and the amount in five years, the President said, could be used to build the MRT or the LRT.

Regarding management of transit oriented development (TOD), the President mentioned that this has not been in operation for decades because of the overlapping management; thus, he said, integration between urban transportation and spatial planning must be designed and calculated, one of which by increasing access to public transport through the development of existing TODs. (FID/EN/RAH/ES)