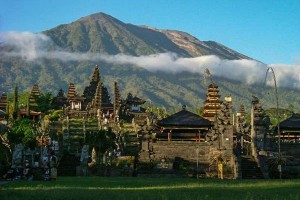 Mount Agungs alert status in Karangasem Regency, Bali, starting from Sunday (29/10) at 4pm Central Indonesian Time has been downgraded to level 3, after holding the highest level (level 4) since 38 days ago.

“Based on the technical data from Mount Agung, since 20 October, the seismic activity dropped dramatically in the first three days, and slowly declined thereafter to this day, as well as from the GPS deformation data, it showed slowdown, and satellite data showed a decrease in thermal energy,” Head of the Volcanology and Geological Disaster Mitigation Center (PVMBG) of the Ministry of Energy and Mineral Resources, Kasbani, said in a press conference held at the Mount Agung Volcano Observation Post, Rendang Sub-district, Karangasem Regency, Bali, on Sunday (29/10).

Kasbani explained that on Sunday (29/10) morning, visual observations have been carried out using drones to see the activity of the crater. The results showed that the activity of the gas blast inside the crater was relatively decreased in intensity compared to the previous condition on 20 October 2017. “Thermally and visually, the data consistently shows a decline, so we declare the status is lowered,” Kasbani said.

With the declining status of Mount Agung’s activity, according to Kasbani, the exclusion zone has been decreased from 12 kilometres to 7.5 kilometres and 9 kilometres to 6 kilometres.

Here are the results of observations of Mount Agung on 29 October 2017 at 4pm Central Indonesian Time:

Starting from 20 October 2017 to present where generally observed sunny weather to rain, with rainfall maximum of 9.4 mm, the wind is weak to moderate to the east and north. Air temperature varies in the range 19 – 31.9*C. Humidity recorded beard in the range of 61.1 – 92.6%. Mount Agung can be observed clearly but also often covered in fog. From Volcano Observation Post in Rendang and Batulompeh, it can be observed the crater smoke with a height ranging from 50-500 meters from the top of the peak, low pressure with white color and thin to thick intensity.

The increase in thermal energy of Mount Agung is observed at least from 10 July 2017 where the ASTER TIR satellite indicates an increase in the number of hot areas. In August and September 2017, the number of hot areas in Mount Agung Crater increased significantly. Through the monitoring of the Sentinel-2 satellite, the rapid increase of Mount Agung’s thermal energy is clearly observed in the period of 5, 15, and 20 September 2017. This is correlated with the increase in seismic quake that also occurred during this period, indicating a significant movement of magma below surface. During the subsequent monitoring periods, thermal energy is still observed at relatively equal levels until mid-October 2017. Afterwards, at least since 14 October 2017, thermal energy detected by ASTER TIR and Sentinel-2 satellite imagery indicated a decrease in magmatic activity.

Observation of volcanic activity of Mount Agung during the crisis was also equipped with the use of drones in order to see more detail the surface activity at Mount Agung. From the results of monitoring that has been done twice on 20 October and 29 October 2017, it can be obtained information that white smoke is still out of the crater of Mount Agung. The smoke intensity at this time is relatively lower than the previous monitoring. In general, the area of ??gas in the Crater area observed did not change significantly. This may indicate that the warming due to magma movements to the surface has not been accelerated.

Mount Agung indicates no significant deformation in the period of 2012-2016. Inflation began to be observed in the period of February-March 2017, but inflation occurring during that period occurred aseismik (without followed by increased seismicity). In April to mid-August 2017, GPS data showed a stable pattern. In mid-August 2017, inflation was again observed consistently and continuously. The peak of this inflation occurred in mid-September 2017. After that, GPS indicates a deflation in the deep source, but in the shallow source increased pressure so that the peak of Mount Agung area upgraded to 6 cm. Since 20 October 2017 to date, GPS data indicates a slowdown in deformation rate. (Bureau of Communications and Information Services, Ministry of Energy and Mineral Resources/ES) (MUR/YM/Naster).