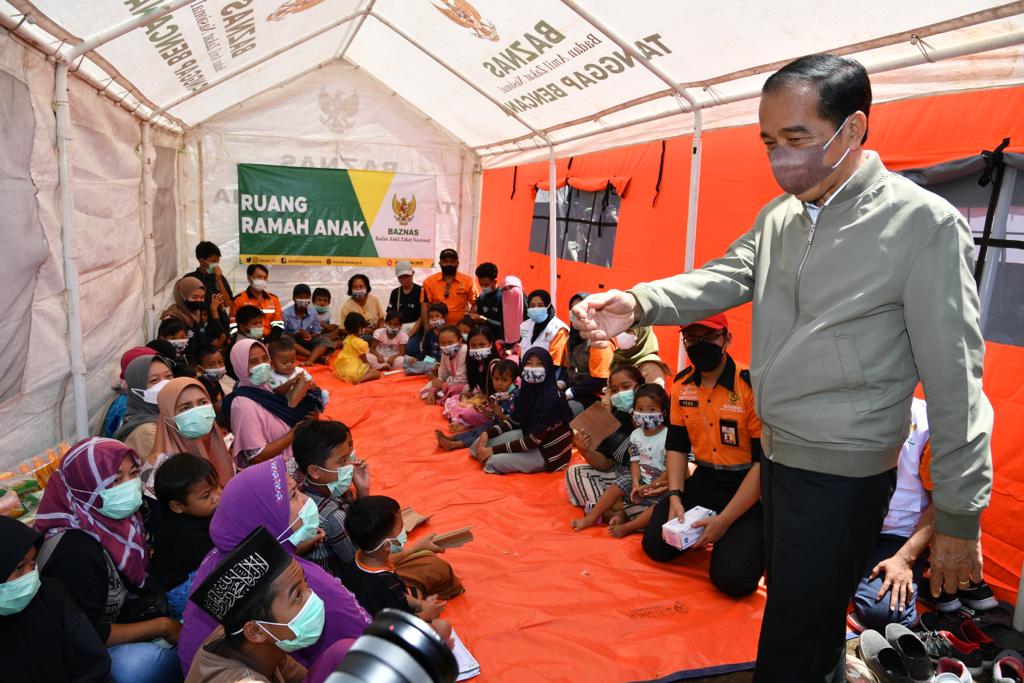 A number of residents affected by the eruption of Mount Semeru Tuesday (12/07) shared their harrowing stories about the eruption and their current condition with President Joko “Jokowi” Widodo during the President’s visit to an evacuation shelter at Sumberwuluh village field in Candipuro sub-district, Lumajang regency, East Java province.

Mount Semeru, which is the tallest mountain in Java and one of the most active volcanoes in the country, erupted on Saturday (12/04), forcing local residents to flee their homes.

“It turned dark in less than one minute, Sir. Indeed, we received a warning before. The observation post said that [the amplitude of] the tremor was 25 [mm],” a displaced resident told the President.

In the meantime, another evacuee from Kamar Kajang sub-village said that local residents had received a warning from the observation post through their cellphone; yet, they did not expect that the eruption on Saturday was bigger than they thought it would be.

“There was a warning. It was in our cellphone, but we thought it was small, Sir. We thought the flood was small. Usually, a tremor [with an amplitude of] 25 [mm] is only a little vibration. The following tremors are usually bigger. The observation post is always on standby,” the evacuee said.

“We only panicked about the ash. The ash, Sir. It was dark. At 15:00, there was volcanic ash. It rained ash, became dark, then cold lava flowed,” another displaced resident added.

Following the eruption, the affected residents went to check their own house using the route they usually take.

Another evacuee shared his story about how the eruption has killed many of their livestock, while others told the President that they were still looking for their missing family members.

The affected residents also asked the President to have damaged infrastructure immediately rehabilitated, to which the President replied that their damaged houses and public facilities, such as a bridge, will be re-built and rehabilitated shortly.

“Yes, we will begin [to rehabilitate] the houses, the bridge,” he said.

“I come here with Minister of Public Works and Public Housing. We have checked everything for now. We will work on it immediately.”

For the record, based on the data from the National Agency for Disaster Management (BNPB), as of Monday (12/06) at 20.15 western Indonesian time, the ash cloud from the eruption has caused damaged to settlements, education facilities, and other public facilities and infrastructure.

While the observation post continues to update the material losses, the current data shows that as many as 2,970 houses, 38 units of education facility, and one bridge are damaged. (BPMI of Presidential Secretariat/UN) (DH/EP)