Mudik Ban to be Implemented on 24 April: Coordinating Minister 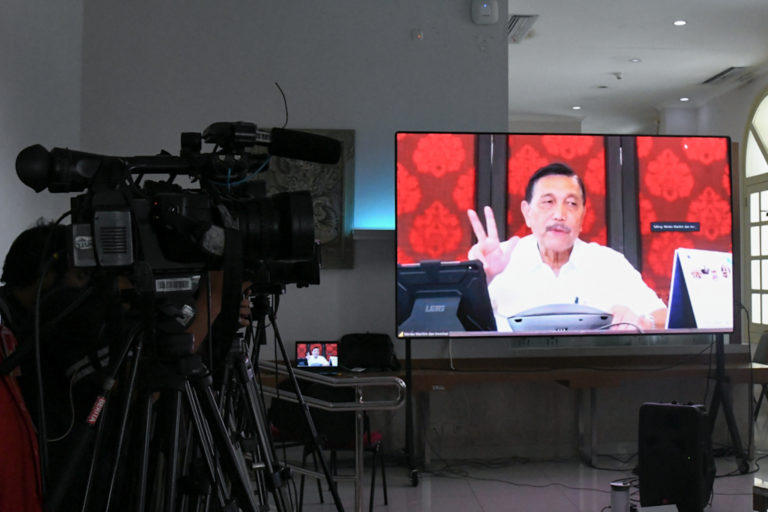 Coordinating Minister for Maritime Affairs and Investment Luhut B. Pandjaitan delivers statement in a press conference after the Limited Cabinet Meeting, Tuesday (21/4). Photo by: PR/Ibrahim.

The Government policy to ban mudik (annual exodus ahead of Eid al-Fitr) will apply as of Friday, 24 April  2020 and sanctions will be enforced from 7 May 2020, Coordinating Minister for Maritime Affairs and Investment Luhut B. Pandjaitan, who is also Minister of Transportation Ad Interim, has said.

“The Government’s strategy is a gradual strategy. In military we had term ‘gradual, graded, and continuous strategy’. We were not rushing because everything should be carefully and thoroughly prepared,” Luhut said at a press conference after the Limited Cabinet Meeting, Tuesday (21/4).

Citing the President’s statement on the mudik ban, Luhut said that the policy is issued after taking into account the results of three surveys conducted by the Ministry of Transportation.

“We conducted (the survey) three times, the last survey being on 13 and 15 April, there were still approximately 20% of people who insisted on returning to their hometown even though there had been a previous appeal from the Government not to go. So we have conducted dissemination, preventing people from mudik, but the survey shows that there are still 24% who want to do the mudik,” Luhut added.

The Coordinating Minister said that the Government, through the online Limited Cabinet Meeting held on 21 April, 2020, has decided to ban mudik during Ramadan and Eid al-Fitr 1441 Hijri for the residents living in Greater Jakarta area and areas that impose Large-Scale Social Restrictions, as well as the areas that included in the red zone of the COVID-19.

According to Luhut, the ban will prevent people mobility to and from Greater Jakarta area, but the ban will not apply to logistics distribution.

“However, traffic flow or mass transportation within Greater Jakarta area, such as Commuter Line, is still allowed to run to facilitate people to continue working, especially for health workers,” the Coordinating Minister explained.

Furthermore, Luhut also said that the Government has been distributing social assistance to the communities, especially in the Greater Jakarta area.

“Based on the directive of President Joko Widodo, all matters relating to the social safety net must also be implemented immediately. For this reason, the Government decided to ban mudik this year,” he said.

The Coordinating Minister further said that to ensure logistics supply is not hampered, the toll road will not be closed, but it will be limited to logistical vehicles or those related to health, banking, and other sectors. (FID/EN)