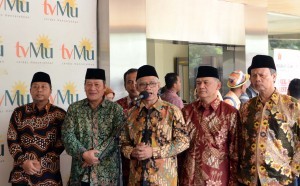 Chairman of Muhammadiyah Central Executive Board Haedar Nashir delivers a statement to the reporters after receiving a visit from President Jokowi on Tuesday (8/11), at the Muhammadiyah Dakwah Center Building

We hope it will be carried out consistently, Chairman of Muhammadiyah Central Executive Board Haedar Nashir told the reporters after receiving a visit from President Jokowi on Tuesday (8/11), at the Muhammadiyah Dakwah Center Building.

As previously reported, President Jokowi during his visit voiced his assertive stand so that legal proceeding against the blasphemy case will be carried out firmly and transparently. I will not defend Basuki Tjahaja Purnama because the case has already been given legal proceeding, the President firmly told the reporters.

Nashir hopes that after the rally held on November 4th in front of the Merdeka Palace, all Indonesians can create more conducive atmosphere to guard this case, so it will definitely be in line with the sense of justice and aspiration of all Muslims whose religious sense and spirit were disturbed.

In his statement delivered after meeting with the President, Haedar said that there are three important agenda that can be implemented so that Indonesians can look toward the future and are not stuck on one or two people who act carelessly in the life of the nation.

Firstly, empowering the people, ummat, and the nations economy concerning the lives of most people. It is conducted so that social inequality issue will not become the core of iceberg issue which can turn into a major problem in our life as a nation, Haedar said.

Secondly, Haedar added, Indonesian political configuration that is already so liberal must be reformed in Islamic and Indonesia-centrist construction.

Thirdly, improving nations civility both in elite and community levels. It is because Indonesia already has the basic philosophy of Pancasila, religiosity, and good history of religions.

Thus, in the future, our social, political, and national lives must be based on the civilized ethics. Therefore, there is no single people and elite who acts, talk carelessly without watching the ethics and the nations collective civility, Haedar concluded. (RMI/ES)(RAS/EP/YM/Naster)