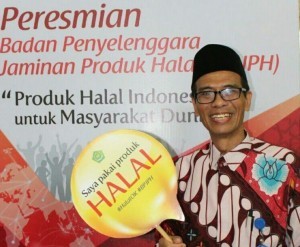 Sukoso added that MUI will continue to carry out the responsibility until regulations and infrastructure of halal information system are ready to operate. He added that the Government is currently drafting Government Regulation on Halal Product Guarantee (JPH).

“Once the Government Regulation is enacted and promulgated, the authority to issue halal certification is entirely in BPJPH as the leading sector of Halal Product Guarantee,” Sukoso said in Jakarta, Monday (7/1).

Sukoso went on to say that draft of the Government Regulation has been signed by several ministers and related institutions, including Coordinating Minister for Human Development and Culture. The draft will be submitted to Ministry of State Secretariat to be signed by the President.

“All parties have signed the draft, so it can be submitted to the President to be signed,” Sukoso said, adding that as soon as the regulation is enacted, and the online application is ready, the registration for halal certification will be implemented at BPJPH.

The JPH Law stipulates that the issuance of halal certification involves BPJPH as a regulator and Halal Inspection Agency (LPH) which includes auditors and MUI as fatwa provider.

Regarding the financing of halal certification, Sukoso explained that the financial management will be the same as that of Public Service Agency (BLU) and further details will be decided later.