Muslims Continue to Show the World that Islam is a Peace Loving Religion: President Jokowi 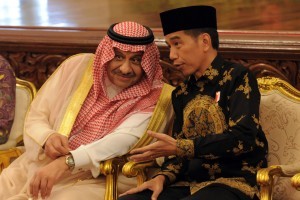 President Joko Jokowi Widodo said Muslims have and continue to show to the world that Islam is a peace loving religion that rejects slander and violence and the one that becomes a blessing for the universe (rahmatan lil alamin).

President Jokowi also said amidst the development and dynamics of the current global lives, many countries have made Indonesia a role model. (We have become) a role model in managing diversity and plurality and other countries learn from Indonesia, the President said in his remarks at the amicable gathering (silaturrahim) with participants of the 8th Prince Sultan bin Abdul Aziz Alu Suud Al Qurran and Hadith Recitation Competition for ASEAN and Asia Pacific Level at the State Palace, Jakarta, Thursday (4/5).

On that occasion, the President hopes that the benefits and the lessons from this event can be felt for humankind, especially in Indonesia. The President also congratulated the participants who won medals at the competition and hopes that their achievements can continue to be maintained in the future, while to those who have not succeeded yet, President Jokowi reminded them not to be disappointed.

Keep practicing and motivating yourself to make achievements in future endeavors. And above all, keep spreading and practicing the teachings of the Holy Quran outside this competition, the President said.

In the meantime, Indonesian Minister of Religious Affairs Lukman Hakim Saifuddin said that this event, which is held in Indonesia every year and this year is 8th edition, is an invaluable trust and honor and the symbol of friendship for Muslims and for the Indonesian people.

He added that in addition to the competition for the ASEAN and Asia Pacific level, the Minister said that Indonesia also hosts a similar competition at the national level in which this year has entered the ninth edition. The Minister also said he is pleased that the number of participants continues to rise from year to year.