Nahdlatul Ulama is the Vanguard of Indonesia and Pancasila, President Jokowi Says 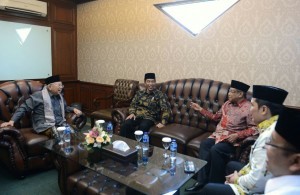 President Joko Jokowi Widodo conveyed his gratitude to the Nahdlatul Ulama Executive Board (PBNU) for their important roles so the demonstration held by various elements of society on Friday (4/11) in front of the Merdeka Palace, Jakarta, ran in orderly and peaceful manner.

I thank the officials of PBNU both the central and regions who delivered statements that cooled down the situation, so the demonstration held on November 4th  ran in orderly and peaceful manner until the sun went down, President Jokowi said after visiting the headquarter of PBNU located at Jalan Kramat Raya No. 104, Central Jakarta, on Monday (7/11).

President Jokowi admitted that he discussed many issues on that meeting which last approximately 30 minutes, particularly on concrete measures and cooperation between the Government and the NU in order to develop the nation. I think there are many things on the ground that needs to be settled by the Government and NU, particularly those which related to peoples economy and radicalism. I think there are many things that can be done by NU and the Government, the President said.