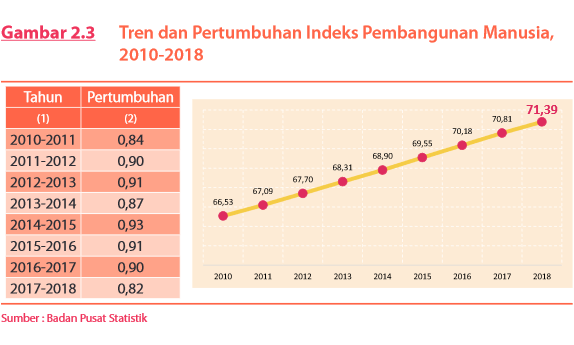 The National Statistics Agency (BPS) reported that Indonesia’s Human Development Index (HDI) has managed to reach 71.39 in 2018, or increased by 0.58 point or 0.82 percent compared to the figure in 2017 which stood at 70.81. That figure shows that Indonesia is categorized as high HDI, since it ranges from 70 to 80.

“Indonesia has been categorized as high HDI for the third time in 2018,” “The 2018 Human Development Index (HDI)” page 2 reads.

The BPS also recorded that life expectancy at birth in Indonesia reached 71.20 years. Meanwhile, years of schooling of population of ages 25 and over reached 8.17 years – meaning that population of ages 25 and over has completed their education until grade VIII. In addition, average years of schooling in Indonesia reached 12.91 years – indicating that children who reach school age (7 years old) have the opportunity to have 12.91 schooling years or complete their education until Diploma 1 (associate degree).

Based on provinces, Jakarta is the only province in the “very high” band, with an HDI of 80.47. On the contrary, Papua is the province with the lowest HDI of 60.06.  Nevertheless, Papua’ HDI this year is improving from “low” band to “moderate” band.

In addition, there are seven provinces that have “high” band in the index, such as, Jambi, Bengkulu, Bangka Belitung Islands, Central Kalimantan, South Kalimantan, North Kalimantan, and Southeast Sulawesi.

For the record, the BPS uses methodology and indicators for calculating the index which were introduced by the United Nations Development Programme (UNDP). However, the Agency has revised the indicators in 2015 to adjust to the data availability in regency/city levels. Thus, Indonesian HDI compiled by the BPS cannot be compared to that of the UNDP.

According to BPS, HDI is measured based on three essential aspects, such as a long and healthy life, knowledge, and decent standard of living. Each aspect is represented by indicator.

Long and healthy life is represented by life expectancy at birth. On the other hand, knowledge constituted by two indicators, namely expected years of schooling for children, and years of schooling. Meanwhile, decent standard of living in Indonesia is reflected by expenditure per capita which has reached Rp11,059,000 per year. (National Statistics Agency PR/ES)