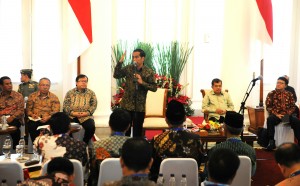 In his remarks, President Jokowi said that such meeting not only be conducted once a year, could be twice, or three times, depending on the needs.

According to the President, the consolidation of the organization in a big country like Indonesia is indispensable. “Because any big ideas, great vision, big plan should be supported together, carried together, so it becomes a unity step,” he said.

President Jokowi hope that in this way, all activities that will be carried out, everything, from the top to bottom, from the central government, provincial governments, district/city, everything is in line and consistent.

Previuosly, Minister of Home Affairs Tjahjo Kumolo in the meeting reported that this meeting is the second phase meeting.

Minister of Home Affairs asserted, all regents are ready to support national policies and central government is ready to absorb and listen to the aspirations of all the problems that exist in the region.