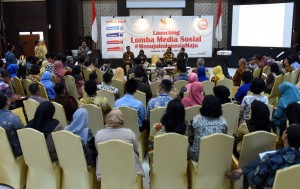 In the era of social media, everything seems to happen very quickly and is unstoppable; thus, netizens play an important role to educate the public on media literacy, including to inform the public about what the Government has done without exaggerating, according to Cabinet Secretary Pramono Anung.

The Cabinet Secretary made the statement in his remarks at the launching of Social Media Contest in Jakarta, Monday (26/3).

The Cabinet Secretary also said that netizens could possibly attend limited cabinet meetings once in a while to understand how the President gives his directives during which they can make live tweets or live videos on Facebook and Instagram to share what the Government is currently doing.

Pramono also said that many people today no longer read newspapers or watch TV since they prefer to use their gadgets, adding that he himself rarely watches political news on TV and prefers watching sports, bikes, NBA or cooking programs as he has to deal with politics every day.

Pramono also argued that in the era of social media, netizens play a strategic role to educate the people. “Netizens can choose to be haters or lovers,” Pramono said, adding that there is almost always a dichotomy in today’s political events.

Fortunately, political events do not give negative impact on the economy, Pramono concluded.