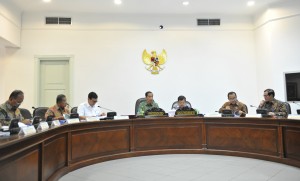 We must eliminate sectoral ego and developing new and renewable energy is our joint commitment, our national commitment. The General Planning of the National Energy must also aggressively boost the development of clean energy and energy conservation, the President affirmed.

Regarding the General Planning of the National Energy, President Jokowi said that this planning is the direction and road map of energy development until 2050.

He went on to say that the national development planning on the energy sector must be made more comprehensively.

It must also have a long term vision and must become a guideline for the Central Government, regional governments, state-owned enterprises, and stakeholders in creating synergy to carry out commitment to develop national energy in the future, the President said.

I hope that the General Planning of the National Energy can answer current energy problems and can anticipate the dynamics of global energy, the President concluded.