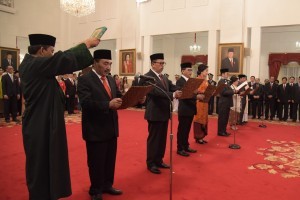 Seven members of the Witness and Victim Protection Agency (LPSK) for 2018-2023 term take oath in front of President Jokowi at the State Palace, Jakarta, Monday (7/1). Photo by OJI/PR.

After inaugurating 16 Ambassadors Extraordinary and Plenipotentiary of the Republic of Indonesia, President Joko Jokowi Widodo witnessed inauguration of seven members of the Witness and Victim Protection Agency (LPSK) at the State Palace, Jakarta, Monday (7/1).

The appointment of the LPSK members is based on Presidential Decree of the Republic of Indonesia Number 232/P of 2018 stipulated in Jakarta, 26 December 2018, on the appointment of members of the Witness and Victim Protection Agency for the 2018-2023 Term.

The seven LPSK members inaugurated on the event were:

The Presidential Decree on the appointment of the LPSK members was read by Deputy Minister of State Secretary for Apparatus Administration Cecep Sutiawan. Afterwards, the seven LPSK members took oath in front of President Jokowi before signing inauguration ceremony minutes. The ceremony ended with singing the national anthem Indonesia Raya.

On the occasion, President Jokowi and First Lady Ibu Iriana Joko Widodo and Vice President Jusuf Kalla along with Ibu Mufidah Kalla congratulated the seven members of the LPSK, followed by other invited guests.