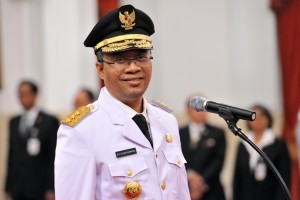 Newly -inaugurated West Nusa Tenggara (NTB) Governor Zulkieflimansyah and Deputy Governor Sitti Rohmi Djalilah have stressed that their administration will give a top priority for post-quake reconstruction and rehabilitation measures in quake-hit Lombok and ensures that the measures will be implemented in a proper and smooth manner.

The Governor also expressed hope that better coordination would ease the post-quake rehabilitation and reconstruction measures in the island.

Regarding funding, the Governor went on to explain that Ministry of Finance has disbursed nearly Rp300 billion to the National Disaster Mitigation Agency (BNPB) and expressed hope that the disbursement takes into account the accountability aspect so that it will not become an issue in the future.

Commenting on corruption cases in Lombok post-quake construction, Zulkieflimansyah admitted that he and his ranks would take lessons from the incident and would be very cautious as well. “I hope the corruption case is a wake-up call for us that disaster management must be taken seriously and there should be no ulterior motives. Moreover, people do need immediate handling,” Zulkieflimansyah said.

The Governor further said with the rainy season approaching, it is impossible for the affected residents to stay in crowded makeshift tents and said that sanitation facilities must be immediately improved. “When the rainy season begins, we hope that the condition at those makeshift tents will have improved,” he concluded. (DNA/JAY/ES) (MUR/EP/YM/Naster).