New Projects to be Tightly Selected 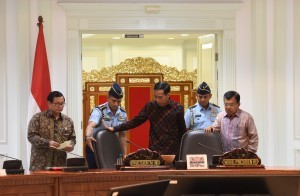 From the report I receive, 7 percent of the projects are proposed to be out from the programs and there are 55 newly-proposed projects as well as one new program, President Jokowi said.

Related to the additional national strategic projects, the President reminded several things. First, the newly-proposed projects must be tightly selected. Based on the calculation, since we dont have much time, I think it does not need to add more new projects, the President said.

The President also reminded the Governments apparatus to encourage the involvement of private parties as well as business entities to finance infrastructure projects. Therefore, the President asked to clearly regulate the scheme of non-governmental financing scheme so it can attract private investment in the projects.