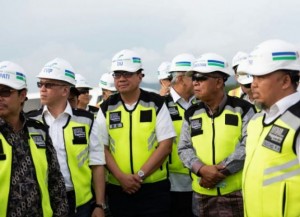 The construction progress of the New Yogyakarta International Airport (NYIA) in Temon Subdistrict, Kulon Progo Regency, Yogyakarta, has been running well according to the target and ready to start its operation in April 2019.

According to the Minister, the NYIA Airport will become one of the largest airports in Indonesia with passenger capacity reaches 14 million per year or 8 times higher than the capacity of the current Yogyakartas Adi Sucipto Airport which is 1.7 million passengers per year.

In addition, runway length of the NYIA Airport will reach 3,250 meters and able to accommodate the largest commercial aircraft types in the world, such as Airbus A-380, Boeing 747 and Boeing 777.

Darmin added that the construction of NYIA Airport is expected to accelerate economic growth in the region by creating multiplier effects for the community and surrounding areas.

The NYIA is projected to create multiplier effect for the economy through employment, Darmin said.

President Joko Widodo himself has included this airport in the list of National Strategic Projects (PSN) since 2016.

For the record, during the partial operational stage starting in April, the airside section of the airport has been completed 100%. Meanwhile for the landslide areas, especially supporting facilities such as parking lot, will be done gradually until the finishing target in December 2019.

The Government also has built road access to the NYIA airport by constructing the South Line (JJLS) underpass that spans 1,100 meters since last November 2018.

In addition to that, the Government also prepares several other supporting infrastructures such as the Airport Railroad for Yogyakarta-NYIA line, Airnav mobile tower, water and electricity.

The Government hopes that the NYIA Airport will drive the economy in Kulon Progo Regency and Central Java province, Darmin concluded. (PR Bureau of Coordinating Ministry for Economy/ES)