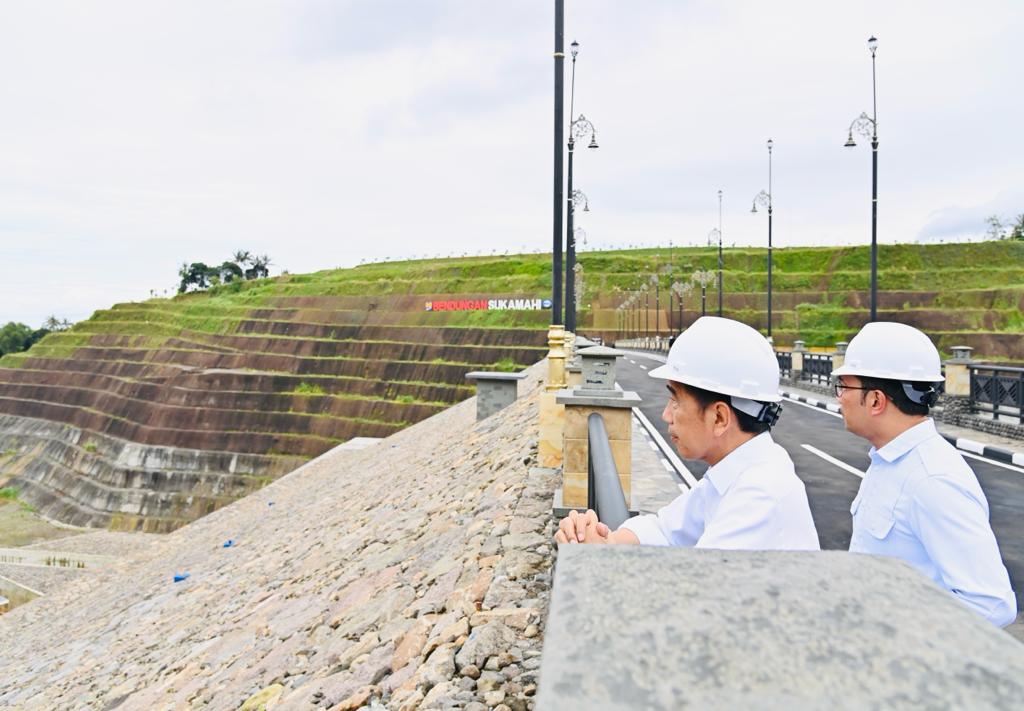 President Jokowi during the inauguration of Sukamahi Dam, in Bogor, West Java province, on Friday (12/23). (Photo: Bureau of Press, Media, and Information of Presidential Secretariat)

The two dams were built as dry dams functioned to reduce floodings. They also have a big potential to be tourist destinations.

In a separate session, Director General of Water Resources, Ministry of Public Works and Housing Jarot Widyoko explained that the Government has prepared a number of supporting facilities for visitors to Sukamahi dam including guest houses, park, greenhouse, and prayer facilities. He also expressed hope that the ecosystem concept can make the dam a premium tourist destination.

“[People] can enjoy fresh air, feel healthy, keep their lungs clear, and enjoy recreation with their families not too far from Jakarta,” Jarot said.

In areas around Sukamahi dam, President Jokowi and his entourage also visited a hydroponic farm in the area. According to Jarot, the hydroponic farm uses disposal area that has been planned since the construction process.

“Construction occupies a small area so we have to find and free another area to be used as a disposal area. However, we do let the waste to be useless so we turned it into a hydroponic farm and a place for tourist destination,” Jarot said.

Jarot explained that a number of fruit seeds have been planted with the hydroponic cultivation technique, adding that when visitors come during the harvest time, they can pick the fruits on the spot.

“Here we have premium melons, ginsengs, strawberries, and rare fruits, such as aligator avocado, and sapodilla sapote weighing more than 1 kilogram, as well as brazillian grapes,” Jarot remarked. (FID/UN)(AW/EP)