Next Week, Government Will Submit RAPBN-P 2015 to the House of Representatives 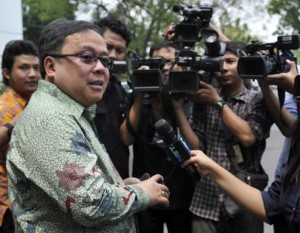 Minister of Finance (Menkeu) Bambang Brodjonegoro argued, the government waiting for when the start of the session of Parliament (DPR), that due to take place next Monday (12/1), to submit the State Budget Amendment (APBN-P) 2015.

Bambang said, the Ministry of Finance has completed the preparation of the draft of APBN-P 2015. However, prior to submission to the Parliament for approval, the draft must be reported to President first.

As we know that the 2015 state budget approved by the Parliament on 29 September 2014 ago, have been prepared assuming the macro economic growth of 5.8 percent, 4.4 percent inflation, the exchange rate of Rp 11,900/USD, the interest rate of State Treasury Letter (SPN) 3 months by 6.0 percent.

While through the transfer of fuel price subsidies (BBM) and the efforts to increase tax revenue, the government of President Joko Widodo (Jokowi) have fiscal space Rp 230 trillion, that could be used to strengthen APBN-P in 2015.

After the cabinet meeting that discussed the APBN-P 2015, the end of last December, Minister of Finance Bambang Brodjonegoro said that fiscal space Rp 230 trillion was obtained under the assumption the economic growth of 5.8 percent, 5 percent inflation, and the exchange rate of Rp 12,200 per US dollar.

“Fiscal space Rp 230 trillion was obtained from the the increase in tax revenues, transfer of fuel subsidy, and the decline in world oil prices,” Bambang said while mentioning, the fund will be allocated to a variety expenditure, most of it is for infrastructure.

According to Minister of Finance, there are three ministries that will receive the biggest supplementary budget in 2015, ie Ministry of Public Works and Housing, the Ministry of Transportation, and the Ministry of Agriculture.  (*/ES)