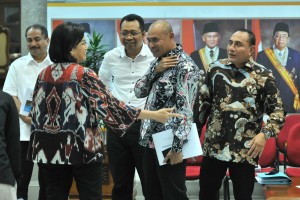 The Government will accommodate campaign promises made by President Joko Jokowi Widodo before the election in the 2020 State Budget, Minister of Finance Sri Mulyani Indrawati has said.

“The 2020 State Budget is formulated to support the programs,” Sri Mulyani said in after attending a limited cabinet meeting on Indicative Ceiling of the 2020 Budget at the Presidential Office, Jakarta, Monday (15/7).

Macro assumptions, Sri added, will be delivered by the President in August through the Financial Note and are expected to be within range of initial discussion with the House of Representatives (DPR).

“We will formulate the Financial Note with a fairly high but realistic tax growth in which income tax and VAT will be arranged based on economic growth in the past 5 years,” the Minister said, adding that she is also currently in the process of discussing tax laws which will affect tariffs and state revenues.

The Finance Minister also stated that there would be some adjustments in 2020, including excise tariffs adjustment and an addition to taxable items such as plastic which can increase revenue and control consumption.

Sri Mulyani also said that in 2020 some of the Government spending will consist of President’s promises, including for tourism infrastructure development.

The Government, she added, also provides budget for the expansion of Jakarta’s MRT (Mass Rapid Transit), adding that the MRT development will enter a second phase that adds a new route from  Bundaran HI (Hotel Indonesia Roundabout)  in Central Jakarta to Kampung Bandan in North Jakarta.

“All of these will be included in the 2020 Draft State Budget and it involves a subsidiary loan agreement to the government of Special Capital Region of Jakarta,” Sri Mulyani said.

The Government, according to her, will also add the number of recipients of Indonesia Smart Card (KIP) for college/university students, from 380,000 to 780,000 recipients and the budget will also be increased from Rp4.8 trillion to Rp6.7 trillion. In addition, the Government will also allocate more than Rp10 trillion for Pre-employment Card which will include digital and regular training facilities, she added.

A budget of Rp25.7 trillion will also be allocated for Affordable Staple Card program and the cards will reach more than 15.6 million families, the Minister said.

The number of households and the amount of benefit will be increased in 2020,” Sri Mulyani said, adding that the three cards are parts of the President’s priorities. (FID/JAY/ES)