No Compromise, President Jokowi: the State Must Win Against Terrorism 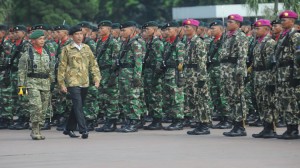 President Joko Widodo (Jokowi) asserts, that the security stability is very important in building the country. Therefore the challenges faced (terrorism, radicalism, extremism) must be resisted without compromise.

“There must be no compromise with anything related to terrorism. the State must be win”, said President Jokowi told reporters after attending the Greatness Ceremony that at once strung together with his appointment as an Honorary Citizen of the military (TNI) Special Forces, in Lapanagan Merah, TNI headquarters, Cilangkap, Thursday (16/4) noon.

With the stability, both political and security, President said firmly Jokowi, we can build our economy will grow. With a growing economy, continued Jokowi, of course, the budget for the military will be increased, and in the end, defense equipment (alutsista) and welfare of all soldiers will be enhanced as well as possible.

President Jokowi believe, with solidity in the ranks of the military, the issues related to security, the security enforcement, illegal fishing, illegal logging, and others, can be eradicated.

Previous TNI Commander, General Moeldoko in his speech said, is a pride for the military (TNI) because the President is willing to be appointed as an honorary citizen of military (TNI) special forces.

As confirmed by the Army (TNI) Commander General Moeldoko, that the whole range of military wanted to show that they are professional soldiers. “The military (TNI) will remain loyal to NKRI, the Constitution, the President of Indonesia. It is set in stone,” he said.

All soldiers, Moeldoko continued, will escort the President and the running of the government to completion. “We get a great honor because the President was in the midst of us, become a part of our big family,” he concluded. (Humas Setkab/WID/ES).