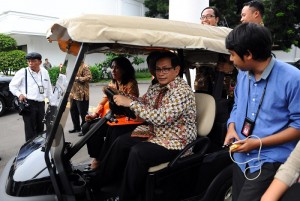 Cabinet Secretary Pramono Anung dismissed the rumor that the Government would increase the number of security personnel for the President and the Vice President following the bomb and gunfire attacks on Jalan Thamrin, Central Jakarta, last week.

However, when we invite foreign guests in a big number, says above 100  200 people, there will be extra security because that its according to the management procedures from the Presidential Security Detail (Paspampres) who is responsible for the security of the President and Vice President, Pramono said to reporters after a coordinating meeting at the State Palace, Jakarta on Monday afternoon (18/1).

Pramono added that adding the number of security personnel does not mean that the situation is not safe.

Its not like that because the President himself who has given the instruction to normalize the situation when he did the inspection on the ground. Only strategicand vital places that need to be secured. The Indonesian National Defense Forces (TNI) and the Indonesian National Police will also deploy their personnel.

Pramono also ensured that the number of the Paspampres personnel tasked to secure the President would not be added, unless when there is additional agenda with many guests.

Other than that, its normal. This is the responsibility of Paspampres and they are the ones tasked with this, he added.

Asked whether security measure will stay like this or not, Pramono said that:

Thus, he said that the Government believes and will also improve the standard operating procedure for security measures. (UN/ES/EN (EP/YM/Naster)